The Haghia Sophia of Trapesunta (Trabzon in Turkish) has been erected in the 13th century as the main (royal) cathedral of the Pontos Greek kingdom at the Southern Black Sea littoral. Its valuable frescoes have been whitewashed after the Ottoman conquest of Trapesunta. The church was rescued from dereliction (it had been used variously as an arsenal and a cholera hospital) between 1958 and 1962 by the University of Edinburgh under the direction of David Talbot Rice and David Winfield. This included restoring the original ground plan and removing a prayer niche constructed into an exterior porch. 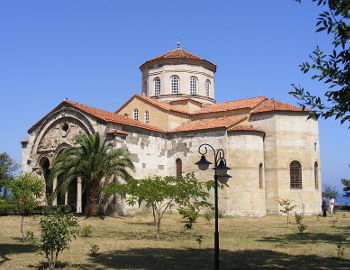 The church also has an exterior frieze depicting “the Fall of Man”. According to Antony Eastmond of the Courtauld Institute of Art (London), who is an authority on the building, “it is the whole ensemble—architecture, sculpture and painting—that makes Hagia Sophia unique. This is the most complete surviving Byzantine structure; there is no 13th-century monument like it.”

Since 1962 the Hagia Sophia in Trabzon has rested as a museum with Turkey’s Ministry of Culture and Tourism. In recent decisions the court has now accepted the claim made by the General Directorate of Pious Foundations (which is a state body), and ruled that the cathedral is an inalienable part of the foundation of Sultan Mehmed II who first turned the Haghia Sophia into a mosque after his conquest of the Empire of Trebizond in 1462. “A building covenanted as a mosque cannot be used for any other purpose,” says Mazhar Yildirimhan, the head of the local directorate’s office in Trabzon. But recent experience suggests that the directorate reconstructs mosques without regard for the millennia of history they contain. The restoration of the sixth-century Church of Sts Sergios and Bacchos (now the Small Ayasofya Mosque) was shrouded in secrecy and completed in 2006 without the academic community being allowed to conduct a proper survey. This raises fear that 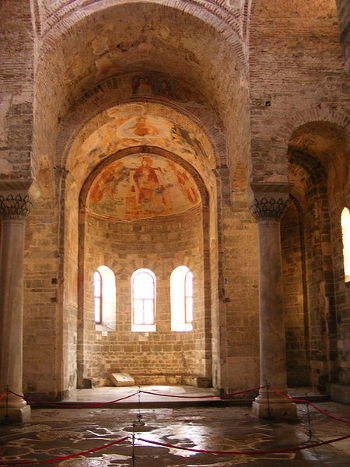 We therefore call upon you to tell Turkey’s Head of State, President Gül, about such concerns and to call for a the return of the once confiscated church properties to their legitimate owners, or at least for the preservation as a protected cultural monument.

The text below will be sent to responsible persons regarding to the Article. You have the opportunity to change the text and subject and replace it with your own message.

Please be aware that your IP-address, your location and internet provider will be saved during sending email in order to follow and avoid abuses.

It is my firm belief that a relevant feature of democracy is to respect the creed and feelings of others, in particular those of minorities. The recent decision of the local Vakιf Direction of Trabzon to convert the Haghia Sophia of Trabzon into a mosque causes pain not only in Greek and other Orthodox Christian communities, but represents an entirely unnecessary and disrespectful act of religious triumphalism.

It is also my firm belief that religious buildings should never be converted against the will of those communities which constructed them. Neither should mosques be converted into churches, nor churches into mosques. After the massive deportations, massacres and expulsion of the Greek Orthodox population of the Black Sea Region during 1916-1922, the Haghia Sophia has been unlawfully dispossessed from the Greek Orthodox Church and in 1964 converted into a museum; its recent conversion into a mosque results in architectural changes of the original building, which is incompatible with the protection of the original nature of this building, in particular the preservation of its valuable frescoes. It is also to be feared that this important monument of sacral architecture will no longer be accessible to Non-Muslim visitors of Trabzon once it is used as a mosque.
Turkey of today, including the city of Trabzon, has a tremendous wealth in genuine mosques, and there is no need at all to convert the remaining monuments of medieval and early Christian cultures into mosques. Such an approach can only be understood as a provocative religious triumphalism to humiliate ‘conquered’ and ‘defeated’ religions.

I have reason to fear that the conversion of the Haghia Sophia of Trabzon serves as a ‘stalking horse’ for the re-conversion of its namesake in Istanbul, which is the most important Orthodox Church building, but has been converted into a mosque following the conquest of the Byzantine capital by Ottoman forces in 1453. A parliamentary petition commission is currently reviewing applications to convert the Haghia Sophia of Istanbul into a mosque.

I therefore appeal to you to use the power of your office to stop the triumphalist conversions of religious monuments, which are harmful not only in domestic aspects, but also in international relations. On 16 December 2011, the U.S. House of Representatives adopted House Resolution 306, calling upon your country to return the Christian church properties it confiscated through genocide, and to end its repression of the surviving members of the vast Christian civilizations that once represented a majority in the territory of the present-day Republic of Turkey.

If the return of confiscated church properties to the righteous owners—namely the Ecumenical Patriarchate—are not politically feasible, the international community expects Turkey to at least respect the status quo.