Holdwater: The mysterious name behind the “premier” anti-Armenian website 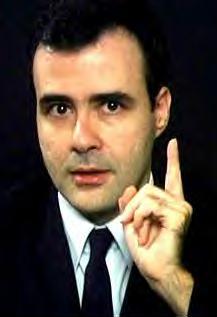 On July 27, 2005, the Yeni Þafak newspaper published an interview, “The Mysterious American Who Drives the Armenians Mad,” about an “interesting and unique” person who writes under the pseudonym Holdwater. “This mysterious American has been financing, for many years, a highly effective, U.S.-based Internet site,” Yeni Þafak reports. “The principal aim of Tall Armenian Tale: The Other Side of the Falsified Genocide is to provide substantial responses to the Armenian Diaspora’s claims of genocide.”According to the newspaper, Holdwater, a New York native, was born in the 1950s to Turkish parents who had migrated to America in the 1940s and raised their son without teaching him a single word of Turkish. He champions the Turkish theses [denial of the Armenian Genocide] on his website at www.tallarmeniantale.com.

Holdwater says he uses a pseudonym because he is the target of threats and sabotage on a daily basis. “If I tell you my real name and you publish it in your newspaper,” he told Yeni Þafak, “trust me, within a few days neither my family harmony nor my good business nor my Internet site will still be in existence.”While afraid to disclose his own name because his peace will be disturbed, Holdwater does not hold back from publishing the photographs of intellectuals such as Halil Berktay and Müge Göçek [of the Workshop for Armenian-Turkish Scholarship], and parading them as targets in his articles full of animosity and hatred. It is quite difficult to understand how someone who is afraid of being attacked can organize such ruthless campaigns of belligerence against others.

I too am among Holdwater’s priority targets. He leads the campaign against me, along with institutions such as the Assembly of American Turkish Associations (ATAA) and the Turkish Forum. He publishes articles on his site which claim that I am a terrorist; that I am responsible of the death of Americans in Turkey ; and even that I have planned and organized murders of American civilians. He lists my “terrorist activities” from the years 1974 to 1975, including precise dates and locations. These amount to nothing more than ordinary, small-scale arrests during student demonstrations of the era, which didn’t even make the press at the time. [See “A Shameful Campaign,” Armenian Reporter, Mar. 17]

It doesn’t take too much intelligence to guess who might have passed to Holdwater the police records of these insignificant arrests, whose dates even I had forgotten. But here’s the real problem: Those who funnel this information to Holdwater as “Taner Akçam’s terrorist activities” are actually taking advantage of Holdwater’s ignorance about Turkey .

Poor Holdwater thinks these arrests were for “terrorist activities,” not realizing that they were all related to crimes of leafletting and postering, for which police permission had been obtained. He seems to have no idea that in 1970s Turkey , one had to obtain permission from what is now called the Security General Directorate’s Special Inspection Branch Directorate for Associations, and that even with a special permit in hand, one could be arbitrarily arrested and held at police headquarters for three to five days.

Once I was arrested for an issue regarding the Cyprus landing. As the Student Association, we were distributing authorized leaflets against the [Turkish] military invasion of Cyprus [1974]. Despite showing our permits, we were held for two to three days at police headquarters. The other actions Holdwater has publicized as my “terrorist activities” were related to our demand for the foundation of a student representation office on campus, where we could voice our issues with the university administration. All this is somewhat difficult to understand for someone who was raised and educated as an American.

In addition, whoever transferred to Holdwater the information about my arrests forgot to send him my photograph. For a long time, therefore, Holdwater represented me on his site by a photograph of a PKK member.

Those who are carrying out a campaign against me, portraying me as a “terrorist,” are exploiting this “mysterious American” called Holdwater. Their calculation is simple: To make use of the “terrorist” image which took root in the U.S. after September 11. They are expecting favors from a mindset which labels as “terrorist” both a person arrested for handing out flyers in 1974 and those who attacked the Twin Towers in 2001.

With this attitude, they are actually making fun of Americans, too. After all, here we have a “terrorist” who has carried out direct “terrorist activities” against Turkey ; and what is logical would be to get hold of this terrorist and hold him to account according to Turkish law. Or at least give information to Americans regarding the past activities of this “terrorist,” his investigation and trial. Instead, they are telling the Americans something which amounts to: “We treat this man as a citizen with a clean record, but could you be so kind as to treat him as a terrorist?” Because, in fact, the citizen in question had his prison sentence annulled with changes made to the Turkish Criminal Code in 1991 and also has a document stating he has a “clean record.”

Ignorant as Holdwater is about Turkey , it is impossible for him to understand all this. But what I find difficult to understand is why this “mysterious” person is so full of hatred and animosity and why he organizes campaigns of belligerence against others despite stating that he is very afraid. I wouldn’t even want to imagine that Holdwater, who describes his appearance as that of “a typical Christian who goes to church with his family on Sundays,” does not know of the Christian teaching which proclaims: Do unto others as you would have them do unto you. It is time for someone to take a closer look at the Holdwater issue.

In his interview with Yeni Þafak newspaper on July 27, 2005, after stating the reasons for withholding his identity, Holdwater says: “I have been able to sustain this struggle for 30 years because I have been able to keep my mouth shut. So please do not push me too much on this sensitive issue.” Holdwater claims to have exceptional skill at protecting his anonymity.I don’t know if anonymity lends a special mystery to Holdwater and a special meaning to his work, or if it makes people wonder, “Who, actually, is this person?” It didn’t strike me that way. I had no interest either in his writings or in his website—until he took on a key role in the campaign against me. One of Holdwater’s important arguments in this campaign was that a complaint should be filed with American immigration authorities, denouncing me as a “terrorist.” Now, I don’t know if he actually did such a thing. Nor am I aware of a direct link between his argument and my recent four-hour detention at the Canadian border. But I did mention Holdwater and the campaign in an article I wrote on the detention. [See “A Shameful Campaign,” cited above.] Holdwater wrote a 30-page rebuttal, full of lies, insults and attacks.

Holdwater relies on the fact that his name and address are withheld. No one knows who I am, so I’ll say whatever I like, he must think.

This approach of Holdwater must be curbed, and he must be reminded that every game must be played according to its rules. To shamelessly insult others while hiding one’s own identity fits with no proper principle. It’s a disgrace, to say the least.

Holdwater’s claim regarding his intense effort to conceal his identity doesn’t seem to … hold water. Or he doesn’t take historians seriously enough. He doesn’t know we are enthusiastic about documents and love to trace them. To sum up, he has shown a certain degree of carelessness, the kind of carelessness committed by an ordinary person who fancies himself as very clever and more intelligent than others.

On June 2, 1980, Council Director Monroe H. Freedman answered Holdwater’s letter. One senses from the reply that Holdwater’s objections to referencing the Armenian Genocide were taken seriously. Freedman states that he lacks sufficient information on the “Turkish theses“ and asks Holdwater to forward citations of relevant sources.

This, of course, is a great honor for Holdwater. Therefore, he sees no harm in publishing a facsimile of Freedman’s letter on his website, with Holdwater’s name removed. Also posted at Tall Armenian Tale is another letter he wrote, this one to the New York Times. We understand from this second letter that, on September 5, 1980, Holdwater had responded to Freedman’s June 2 letter. I don’t know whether Holdwater is aware of this, but the Holocaust Memorial Council and the Holocaust Museum it governs are public institutions—and therefore this correspondence is available to the public. Which means, in accordance with the principle of transparency, that anyone can view the originals of Holdwater’s letters.

Once you have the text of Freedman’s letter dated June 2, 1980, and published by Holdwater, as well as the information that Holdwater wrote a reply on September 5, 1980, it is rather easy to access these documents. The Holocaust Museum must provide this information to anyone who demands it.

Yes, Mr. Murad Gümen, or, to use the English alphabet, Murad Gumen; as you see, one doesn’t have to be comic-strip detective Kerry Drake to find out who you are (Murad Gümen understands very well what I mean). Tracing the documents published by you has proved sufficient. I believe you will stop taking historians so lightly from now on. As you have understood, we are talking about a document that you yourself have also published.

All I am saying is, to prevent any distortion and alteration of the document, that the name on this document, which you effaced, is Murad Gümen. In a sense, I am rectifying the alteration you made on a document presented to the public.

As you may know, we scholars don’t particularly appreciate the alteration of documents. Such distortion is an occupation reserved for the Turkish Historical Society. Attacking others, and insulting them, while concealing your own name, does not fit moral conduct at all, Mr. Murad Gümen. Believe me, I am still quite curious as to why you think that I, and many others in my position, do not deserve a right you so readily claim for yourself.

Dr. Akçam, a professor of history at the University of Minnesota, is the author of A Shameful Act: The Armenian Genocide and the Question of Turkish Responsibility (2006). The present article has been edited from a two-part article written for Istanbul ’s Agos newspaper (”Holdwater: The Mysterious American who Drives Armenians Mad,” May 18, 2007; and “Holdwater: The Golden Rule,” May 25, 2007); the translations for both parts were by Nazým Dikbaþ. The July 27, 2005, interview in Yeni Þafak was conducted by Ali Murat Güven.