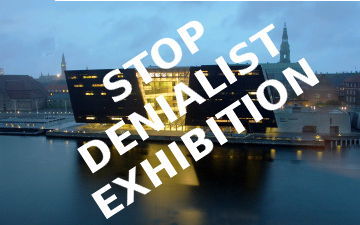 Don’t Stand Against Turkey’s Democratization and Confrontation with its History!

The individuals whose signatures appear below have been distressed to learn that the Royal Library of Denmark has given the Turkish government the opportunity to present an “alternative exhibit” in response to the Armenian Genocide exhibition.

It is incorrect to suggest that two different views of what happened in 1915 are possible. Over 1 million Ottoman-Armenian citizens were forced out of their homes and annihilated in furtherance of an intentional state policy. What exists today is nothing other than the blatant denial of this reality by the Turkish government.

An honest reckoning with history is the non-negotiable precondition of a true democracy. The Turkish government has been suppressing historic truths and following a policy of denial for more than 90 years. In response to the many intellectuals in the nation who have urged the government to confront history honestly, this systematic suppression and intimidation policy, which reached its zenith with the assassination of journalist Hrant Dink in 2007, continues unabated. The European Court of Human Rights has ruled in several cases on this subject against Turkey’s position and actions.

By giving the Turkish government the opportunity to present an “alternative exhibit,” you support their policy of suppression and intimidation. The support that you are extending to a regime that has made opposition to confronting history and denial of the truth a fundamental principle is equivalent to supporting a regime of apartheid. We want to remind you that your support constitutes an obstacle to democratization efforts in Turkey today.

There is a regional aspect of this policy also. Peace, democracy, and stability in the Middle East will only come about through regimes that are willing to confront history honestly. Through its position of denying historical truths, Turkey represents an obstacle to the development of peace, democracy, and stability in the Middle East. We, citizens fighting for a democratic Turkey, urge you to reconsider your decision to grant the Turkish government the opportunity to present an “alternative exhibit” and withdraw the offer immediately, and we invite you to join and support the democratic civil initiatives demanding that Turkey confront its history honestly.

The Royal Library’s director, Mr. Nielsen, has meanwhile responded to AGA’s protest letter. In his reply, he quotes from an earlier interview, given on 18th December 2012 in a Danish paper. Obviously, Mr. Nielsen believes that his offer of a “parallel Turkish exhibition” is supportive for Armenians and the below mentioned protesters in giving their cause more public attention.

The Royal Library’s director, Mr. Nielsen, has meanwhile responded to AGA’s protest letter (published below). In his reply, he quotes from an earlier interview, given on 18th December 2012 in a Danish paper. Obviously, Mr. Nielsen believes that his offer of a “parallel Turkish exhibition” is supportive for Armenians and the below mentioned protesters in giving their cause more public attention.

Our comment is that Mr. Nielsen’s offer to Turkey is an entirely misguided step. Protests against any kind of public mention of the Armenian genocide – be it in exhibitions or other ways – belongs to the tasks of any Turkish diplomat, including the demand for counter-exhibitions, lectures etc. It is interesting that this is not the first successful intervention of the Turkish Embassy at Copenhagen. Eight years ago, in May 2005, the Embassy, represented then by Ambassador Mrs. Fügen Ok, successfully “kidnapped” an international conference on the Armenian Genocide, organized by the Danish Center for Genocide and Holocaust Studies (Copenhagen). Mr. Uffe Østergaard, the responsible director of the Department for Holocaust and Genocide Studies in Copenhagen, for several years kept his denialist views publicly and unequivocally known. Mr. Østergaard regularly insisted that he held a “neutral” position about the “Armenian” and the “Turkish” points of view vis-à-vis the “Armenian question”.

Back then he too was involved in the planning of creating a “neutral” institution or “place of dialogue,” where the “question” of what Mr. Østergaard sometimes referred to not as genocide, but as “the tragic events of 1915″ could be discussed by Armenian and Turkish scholars. Enough is enough. We therefore call on all supporters of human rights issues to join in and to protest against this repeated support of genocide denial by a Danish institution.

My answer to e.g. the address mentioned below has been published in the leading Danish newspaper Berlingske today. Furthermore, please read parts of an interview, I gave to a Turkish journalist the day before yesterday, which is supposed to be published in a Turkish newspaper shortly. I agree to almost everything in the open letter of the 37 Turkish intellectuals, apart from a possible accusation that the Royal Library should oppose the democratic development within Turkey, which was the headline interpretation of the open letter in Berlingske on December 18. Interview:

“* How did this project come out? Whose idea was it and who would be the collaborators? Answer: It arose during a meeting with the Turkish ambassador to Denmark on his request in late October, who asked whether the Armenian view of the genocide question was identical with official Royal Library or Danish Government policy, which I, of course, had to deny, although I expressedly told him that the Turkish view of the issue, including the denial of the enormous number of victims, was not shared by e.g. Danish historians, including myself. But, from a critical-methodical point of view it seemed to me, as a historian, an interesting issue, how on earth Turkey at a qualified level in a Danish debate climate would argue and try to prove and support their cause. Therefore, I offered him to present a “parallel” poster exhibition, if it was documented at the same level as the Armenian one, which I informed him about. I, too, informed him, of a very critical and well documented Danish book that was published in 2010 about the genocide, based on contemporary Danish sources, of which he got my own copy. So, from this point of view I think that the ambassador and Turkey will be in troubles with respect to present another “view” or narrative.

* Is it related solely to a previous exhibition in Copenhagen University Library „Armenian Genocide and Scandinavian Response“ or is it already on the Royal Library’s schedule to have such an exhibition? Answer: Cf. above. Therefore no, it is not on the planned agenda for exhibitions.

* Did you have a chance to see materials of exhibition? Answer: Of course, I shall have to approve it.

* What do you think about the open letter to you from Turkish intellectuals on Berlingske Newspaper and the other discussions on Danish media? Answer: I quite agree to the content, apart from the view that The Royal Library by showing such an “alternative” exhibition can be interpreted as a support of the official view of the state of Turkey and thereby works against democracy in Turkey. On the contrary, I see it as a pressure upon Turkey to come to terms with its denial of the historical reality with respect to the slaughters of Armenians before (e.g. 1894-96) under and after the First World War.

I was quite aware, when I offered the Turkish ambassador to put his neck into the rope that this would create an enormous debate and give the Armenians and Turks, who oppose the position of Turkey, a unique opportunity to create public awareness about the issue, and – not least – create awareness among the ca. 100.000 Danish citizens of Turkish origin about this matter and the unbearable position of the Turkish Government. I’m sure that most of them do not know the facts.

And, with my best will, it is a riddle to me that people can’t see that this is a support to both the Armenian fight for recognition of the facts of history and the historians’ work to document it. In Denmark we have a democratic tradition for not suppressing even unacceptable positions and viewpoint, but to expose and often ridicule (such as denials of the Holocost) them. That is – and was in the situation that arose at the meeting with the Turkish ambassador – my real motive behind the offer.”

The text below will be sent to responsible persons regarding to the Article. You have the opportunity to change the text and subject and replace it with your own message.

Please be aware that your IP-address, your location and internet provider will be saved during sending email in order to follow and avoid abuses.

“Alternative Exhibition” on Genocide against the Armenians

Genocide is the largest crime that international law has to deal with. The genocide against 1.5 million Ottoman Armenians and further two millions of Ottoman subjects of various Christian denominations during the last decade of Ottoman rule are empirically at the base of the UN Genocide Convention, whose author Dr. iur. Raphael Lemkin was very aware of these crimes. For that reason he tried already in 1934 to introduce an international convention into the League of Nations, but succeeded only after another World War and another massive genocide.

Crimes are never a matter of alternative views or interpretations of the past. For that reason the “alternative exhibition” in the Royal Library in Copenhagen is entirely contra-productive to the goals of the above mentioned UN Convention.

I hereby express my sincere protest against this exhibition and the motifs behind it. I expect you to immediately reconsider your decision to grant the Turkish government the opportunity to present a denialist “alternative exhibition”. Finally I join into the protest articulated in the Open Letter of 37 intellectuals of Turkish citizenship or ethnic background and